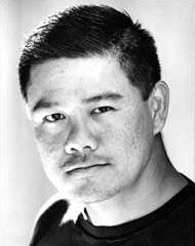 Chay Yew was born in Singapore in 1965 by Chinese parents. He became fascinated by American pop culture at an early age and when at 16 his father suggested he study abroad he chose Pepperdine University because of the images of Californian beaches he knew from the cinema: “I thought, get killed or lead a beach life, so I went to LA.” During his time in California he learnt about being an outsider. He auditioned for a role in a college production and was rejected on the grounds of his being Asian. Yew let the professor know what he thought of the rejection: «You think I’m going to be playing The King and I for the rest of my life? No way.» Yew went on to Boston University where he wrote the first version of Porcelain as his graduation thesis. He found nobody willing to audition for the play due to its theme of cottaging.

Chay Yew returned to Singapore in 1988 and wrote As if he hers. The play revolves around a heterosexual businessman who contracts HIV on a trip to Thailand and the help he receives from a gay Malaysian social worker when he discovers his HIV-status. It was banned by the authorities for its ‘sympathetic portrayal of the homosexual character’. Yew rewrote the play, altering stage directions to leave open the character’s sexuality. This time the play evaded censorship, although the production made clear the character’s homosexuality. Now Chay Yew cites this experience as an important lesson in writing between the lines. These early encounters with racism and homophobia didn’t scare Chay Yew away from controversial subject matter. When he was a playwright-in-residence with an Asian theatre company in London in the early 1990s, he rewrote his thesis project as a play, changing the locale from Boston to London. Porcelain became his breakthrough play earning him a London Fringe Award for best play. Radical explorations of racism, homophobia and censorship have since become the hallmarks of Chay Yew’s plays. His plays are highly individual, each one of them an attempt at better understanding his place in history and society. He says of the creative process: ‘I think the thing about art is that you cannot want to tell a story in order to fill people’s lives, because then it becomes a product. Just like, I can make toothpaste and I know it can make people say «my mouth is going to smell fresh.» But the weird thing about art is that it has to be selfish and sometimes egocentric.’

His plays include Half Lives (1996), in which an Asian-American goes to Singapore on business, marries his pregnant girlfriend and brings her to America, where their son grows up and eventually comes to terms with his homosexuality; Red (1998), which explores the crackdown on artists during China’s Cultural Revolution; A Beautiful Country (1998), which is narrated by a drag queen and explores the experiences of Asian Americans over the last 160 years; Wonderland (1999), about an Asian-American family’s attempt to capture the American dream and A Distant Shore (2005), a sprawling history of Asian and Caucasian interaction from the 1920s to the present.

Yew says of his cultural identity: ‘I guess the best way to describe my situation is the fable about a crow and a sparrow I wrote about in my play Porcelain–that’s how I always felt about my being in the world: That you can never belong to a tree of crows or a tree of sparrows. You belong to a tree of your own because you’re in-between. There’s an inbetween-ness about me–coming from Asia, living in America, being in LA, going to New York all the time, working in one rehearsal room to another. And with this template, this is how I look at how I fit in.’ He says that the only place where he truly feels at home is the theatre.